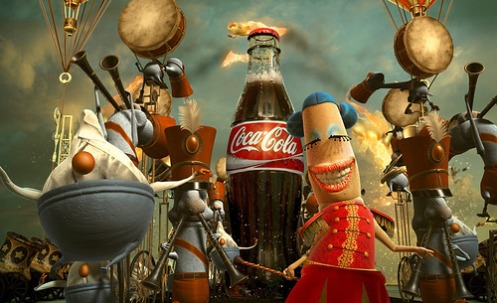 It’s the weekend before Christmas.  Our family is scattered around the living room, vaguely watching A Christmas Story on TV while we wrap presents and place some last minute decorations on the tree.  A happy sounding jingle starts and we all glance toward the television.  Projected on the screen, we see a little baby polar bear accept a gift of a Coca-Cola bottle from an adorable baby penguin.  Dad chuckles and exclaims, “hey guys, watch this bear!” and a collective “awwwww!” is gasped by myself, my mother, and sister.  At the end of the ad, words appear on the screen, “Give. Live. Love. Coca-Cola.”

Coca-cola has long been an icon of the American way of living.  I’m sure we’ve all seen the old 1950s posters featuring the flirtatious pin-up girl and her bottle of the deliciously sweet carbonated beverage.  Since the late 19th century, coke bottles have lined the shelves of convenience stores, satisfying the American public and, eventually, the rest of the world.  Today, Coca-Cola takes a new direction in marketing, finding creative ways to mix the older, reliable drink with the new high tech world, in hopes that doing so will break down the barrier between generations and allow them to sell to a broader public.

In 2006, the Coca-Cola Company launched an ad campaign known as the “Happiness Factory.”  The campaign was centered around a commercial which displayed the inner workings of a Coca-Cola vending machine.  In this commercial we see cute, tiny, and sometimes fuzzy creatures all doing their part to create this single bottle of coke, and then affectionately giving it a heartwarming, musical parade sendoff before it slides down the ramp and into the hands of the customer.  This was a bold step in a noticeably unique direction for the company as they began to appeal to a different kind of audience.

The younger, up-and-coming generation of coca-cola drinkers is different than any that has ever existed before.  They’re an entire generation of what would have been considered computer geniuses only 20 years ago.  High tech devices are more readily available at an ever-increasing rate, creating in children a growing need for bigger (or these days smaller) and better items.  What better way to satisfy that desire than to create an elaborate, computer generated commercial that would rival full length films such as Finding Nemo and Shrek in digital quality.

From this original commercial spurred an entire series of Happiness Factory advertisements and short films.  In August of 2007, the Coca-Cola Company unveiled “Happiness Factory—The Movie.”  The movie, which is only a little over three minutes long, features the crusade of a tiny vending machine inhabitant who journeys across their world to save the day after the Coca-Cola factory runs out of coke.  Clearly Coca-Cola is attempting to take the largest money making franchise in America, the movie industry, and used it to popularize their product.  Marc Mathieu, the senior vice president of Global Brand Marketing and Creative Excellence, The Coca-Cola Company, was quoted saying, “Everything about this campaign takes its lead from the entertainment industry—from the movie-style trailers to the authentically designed movie posters to the promotional packaging.”  The entire premise of the movie style of advertising is the same as that of making the commercial digital; to persuade a younger generation to buy their product.  The premier for this film was entirely virtual, hosted in the popular world of Second Life, which is obviously younger-generation oriented.

Even though the company is going digital, there are still visible traces of the classic Coca-Cola that we’ve all come to love in today’s advertisements.  The coke bottle itself is such an example.  Despite the fact most any bottle you would buy today is made of plastic with a twist-on top, the classic glass bottle complete with bottle cap has remained an unmistakable symbol for the company.  You notice in the “Happiness Factory” that amidst the modern animation, music, and style of characters the glass bottle with that distinctive Coca-Cola shape is the most prominent figure of each and every shot.  I believe that the intentional use of the older design mixed with the new-age styles is meant to draw in the younger audience, while at the same time maintaining the older, loyal customers that have served so well over the year.

Some people might argue that the new, elaborate Coca-Cola commercials are flashy and unnecessary, giving the younger audience a false view of coke products, and possibly even reality.  They could say that the depiction of the magical world inside of the vending machine would misdirect children to believe that such things are possible or even true.  Some, I’m sure, would simply say that the ads mislead the general public into thinking the product is better than it could ever be in reality.  What these people would not realize, however, is that the Coca-Cola commercials are meant to give the company a lighthearted, friendly persona, and to inform the public of their family oriented ideals.  Mathieu suggests how the “happiness Factory” commercial does this when he states the following;

"In 'Happiness Factory -- The Movie', the iconic Coca-Cola contour bottle and the enduring mystery of the brand's secret formula, come together to create a great piece of entertainment for the audience and an effective way for us to express the values of the Coca-Cola brand.”

Coca-Cola makes it their goal to show their ideals through not only their advertisements, but through charities and events; such as the event in August of this year where Coca-Cola honored students who the first in their families to attend college.

Advertisement today is more elaborate and high-tech than ever before, and Coca-Cola is most definitely one of the front-runners.  The “Happiness Factory” commercial is a prime example of the digital innovation that has spread from the movie theaters and into the more everyday field of advertising.  As a company that has long found its place in the home of the average American, Coca-Cola is able to use this new-age technology and combine it with their classic style create a unique campaign that is sure to satisfy coke drinkers of any age.