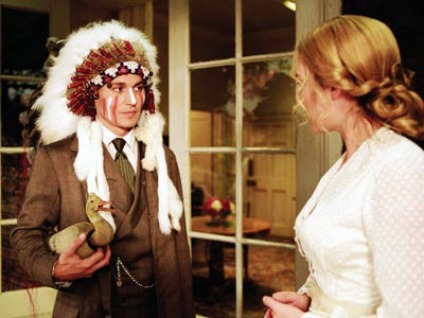 Roger Ebert is the most famous critic living today, and to some of his readers, his word is law.  This is a trait that all reviewers have in common; people will borrow their opinions instead of making their own.  I would never go so far as to say that I think Ebert’s word is law.  In fact I’ve disagreed with his opinion on many occasions.  But I do think that his experience in motion picture critique allows him to look at the minute details of a movie that will elude the average viewer the first time they see the film.  That is why I thought it was a good idea to choose one of his reviews as the first of the three I will analyze.

In his review of Finding Neverland, Ebert first briefly summarizes the plot, frequently interjecting with short and highly opinionated comments.  He describes the character of J. M. Barrie and comments on Jonny Depp’s portrayal of him, describing it as making “Barrie not only believable, but acceptable” (Ebert).  The plot is outlined, informing the reader of where and when the story takes place, and who the main characters are.  He goes into more detail than is typical of a review when he describes Barrie’s relationship with the four Davies boys and their mother Sylvia, mentioning the implications surrounding a grown, married man who would spend all of his time with young boys.

He makes a comparison between Barrie and one of the four boys, Peter.  He suggests that the characters are the opposites of one another.  Meaning that while Barrie is a man who never grew up, Peter is a child who grew up far too quickly.  “He is wise and solemn, feels the loss of his father more sharply than his brothers, and boldly tells Barrie: ‘You're not my father’” (Ebert).

Ebert uses an entire paragraph near the end of the review to give credit to Depp for his ability to jump so seamlessly between roles in other movies.  He says that, “for Depp, ‘Finding Neverland’ is the latest in an extraordinary series of performances” (Ebert).

My searching of movie reviews next led me to one in Rolling Stone magazine.  The author, Peter Travers, uses a very different style from the previously mentioned Ebert.  To keep readers attention, Travers makes an effort to beef up scandal where it pokes its head and creates sexual motifs where non exist.  He writes, “Sexuality hovers o the edge of this movie, as if afraid to enter and spoil the family fun” (Travers).  He emphasizes a, “sexual heat” in Mary Barrie, the wife of J. M. Barrie, commenting on the possibility of an affair that is kept very hush-hush throughout the movie (Travers).  To grab the readers attention, Travers immediately begins with a comparison of Depp’s character in this movie to that of Captain Jack Sparrow in the, Pirates of the Caribbean movies.

Travers uses lots of slang to add humor and relate to the readers in his review.  Words and phrases such as, “odd duck,” add to the way the review appeals to younger readers and readers who may not have ever grown up themselves (Travers).  And, just as Ebert did, Travers offers a large amount of props due to Jonny Depp for his performance in this movie and in others.

The final review was written by Mick LaSalle for the San Francisco Chronicle.  It is far less appreciative of Jonny Depp’s efforts than the previous two reviews were.  Had he liked Depp more, he might not have described the film as, “like a fish-stick dinner, followed by a mouthwatering dessert,” meaning that the beautiful ending is preceded by a not so interesting beginning and middle section (LaSalle).  He severely criticizes all of the actors, Kate Winslet exclude, saying that Radha Mitchell (Barrie’s wife), “goes through the movie looking stunned,” and Dustin Hoffman (Barrie’s producer), “has trouble deciding whether the producer is British or American,” (La Salle). LaSalle’s entire review is nothing but a negative mash of insults until the last paragraph.  Then he loves it.  He says that “Peter Pan” saves the show.

The three previously mentioned reviews, when compared, are seen to have many differences, but one cannot ignore the fact that they each had some very fundamental similarities.  For example, each of the reviews, although in different ways and with different tones, did an excellent job of summarizing FindingNeverland in a way that would express their opinion without actually giving away any of the important parts of the film.   They use examples from the film to support their opinions and do so in a language appropriate for their audience.  Their experiences in the world of motion pictures allows the average reader insights into the specific field that we wouldn’t usually have.  With the large number of movies that come every week nowadays, their comments can be helpful in weeding out the likely dud. 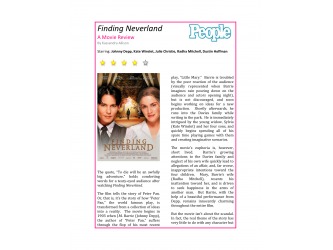 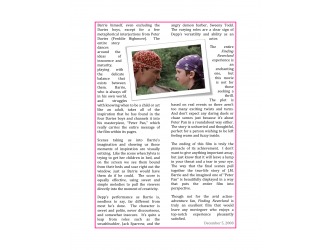